Out of all the agents used in wound management honey is certainly the most enduring, with records of its use dating back more than 2000 years.1

In the latter half of the 19th century and early 20th century the advent of antiseptics, followed by antibiotics, resulted in ‘traditional’ therapies such as honey being abandoned. However, as we start the 21st century with an increasing incidence of multi-drug resistant bacteria (not to mention chronic wounds such as pressure ulcers, venous ulcers, and diabetic foot ulcers) there is a need to explore and revisit treatment options such as honey.

Modern healthcare rightly calls for evidence-based practice and this applies to wound management. The evidence supporting the use of honey based on both laboratory and clinical research data is increasing.2-5 This paper will present a review of how honey works in the wound environment with reference to current research.

A cursory glance at commercially available honey will demonstrate the variability in its colour and viscosity. This is primarily due to the floral source.6

Darker honey such as manuka honey is high in antioxidants while lighter honey such as sunflower honey is low in such substances.6 Honey contains approximately 80% sugar with the remainder being made of up water, minerals, enzymes and other constituents (see Table).

In choosing honey for use in wound management, pharmaceutical standards that apply to other products must also apply to honey. Therefore, only products that are licensed and have met quality and safety standards should be used.

It is proposed that one specific type, manuka honey, has a high antibacterial activity associated with a non-peroxide unidentified phytochemical component, the nature and stability of which is unknown.8,9 Manuka honey is derived from the leptospermum scoparium plant which grows in New Zealand and Australia.

Clinical case studies have also reported eradication of MRSA from a wide variety of aetiology-specific wounds.14-16 Of all the pathogens that have been tested for their sensitivity to manuka honey, pseudomonas aerugINOsa is the least sensitive.17

It has been argued that the antimicrobial effect of honey lies in its physical properties rather than its chemical composition.18 Honey is hyperosmolar and like other hyperosmolar substances it restricts the availability of water to bacteria and other organisms.19

In addition, because bacterial cells are largely impermeable to sucrose and similar sugars, honey also acts osmotically to withdraw water from bacteria.18 This simple process could contribute to the management of the bacterial burden of the wound.

Furthermore, manuka honey has the potential to limit the growth of many wound pathogens, is cheap, non-toxic and unlikely to select for further antibiotic-resistant strains.13

Not only has honey been found to have various bio-activities important in the wound healing process, but also considerable evidence from clinical trials has demonstrated its worth among wound management products.21

To date, 20 randomised controlled trials (RCTs) have been identified which use honey compared to other standard agents to treat a variety of wound aetiologies. While the results of the majority of studies, particularly in burn management, have shown honey to be superior to the standard agent, the variability in the type of honey used limits a comprehensive analysis of the findings.

However, an RCT of manuka honey versus hydrogel to deslough venous ulcers reported that manuka honey-treated wounds reduced the percentage of slough in the wound bed from 85% to 29% after four weeks.25

This was greater than the reduction achieved in the hydrogel group of 78% to 43%. The difference, while clinically significant, was not statistically significant (p 0.065).25 In the same study, the wounds treated with manuka honey had improved healing rates over that achieved with hydrogel (p 0.037).

Honey has an average pH of 3.5. The acidity of honey helps to alter the highly alkaline, non-healing environment seen particularly in chronic wounds such as venous ulcers. Topical acidification may promote healing by causing more oxygen to be released from haemoglobin.

Furthermore, some authors suggest that the promotion of granulation tissue seen in the wounds treated with honey may be due to the generation of hydrogen peroxide, low levels of which stimulate angiogenesis, and the growth of fibroblasts. Increased angiogenesis provides more oxygen, which is a factor for tissue regeneration.

Honey is now available in two forms for clinical use. These are a gel or an alginate impregnated dressing. The majority of medical grade honey dressings use unifloral manuka honey. The gel is best applied to the secondary dressing such as an alginate and then onto the wound. This is secured with a secondary dressing or compression therapy in the case of venous ulceration. Typically, 20ml of honey is used on a 10cm x 10cm dressing.

The alginate dressings are cut to the size that extends beyond the edges of the wound, covering any surrounding area of inflammation. The frequency of change is dependent on the level of exudate.

The anti-inflammatory and antibacterial action of honey will reduce the amount of exudate, so within a few days the dressings should need to be changed less frequently. Thus, as the levels of exudate decrease the frequency of change will also decrease.

Abscess and cavities should be filled with honey before the honey-dressing or secondary dressing is applied, so that honey is always in contact with the wound bed.

The most convenient way of doing this is to use a tube of sterilised honey. Some patients experience ‘stinging’ when honey dressings are applied. This should dissipate within 30 minutes. Clinical experience and some reports in the literature suggest this is confined to arterial compromised ulcers.26 The newer slow release honey dressings aim to address this issue.

The laboratory and clinical research evidence supporting the use of honey, particularly medical grade honey, in wound management has increased over the past few years.

The lack of reported adverse effects and availability in a safe licensed format ensures that it can be considered in modern wound management.

In a resource changing environment the use of honey with broad antimicrobial properties, desloughing ability, and lack of adverse reactions may provide a viable cost-effective alternative for some wounds.

Georgina Gethin is an RGN (Dip HE wound care) in the Research Centre in the Faculty of Nursing and Midwifery, Royal College of Surgeons in Ireland

References on request from nursing@medmedia.ie 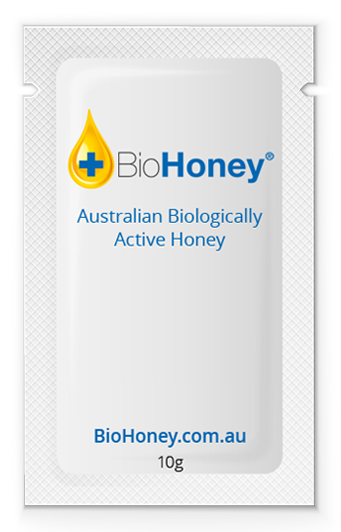